From Omegna up to the 1492 meters of the legendary Mottarone and its views thanks the assisted pedaling, a fantastic day of nature and cycling

The ascent of Mottarone is a legendary destination for cyclists, but getting to the 1492 meters peak climbing the long asphalt road is not a small feat.

With assisted pedaling e-bikes the climb becomes easier (even if you have to pedal anyway :) ) and we will enjoy the splendid views of Lake Orta and also of Lake Maggiore, just like during the “Belle Époque” the painters, musicians and intellectuals who climbed the peak (then on foot) for the holiday did.

The descent will instead be on paths and dirt roads up to Armeno, where we will then meet the paved road that will take us back to Omegna to the starting point

A worthy experience, a great day of sky, open spaces, mountains and cycling.

For this trip we recommend using a full suspended electric mountain bike. It is possible to rent it from us, at an additional cost of 50 euros for the whole day, including the helmet. 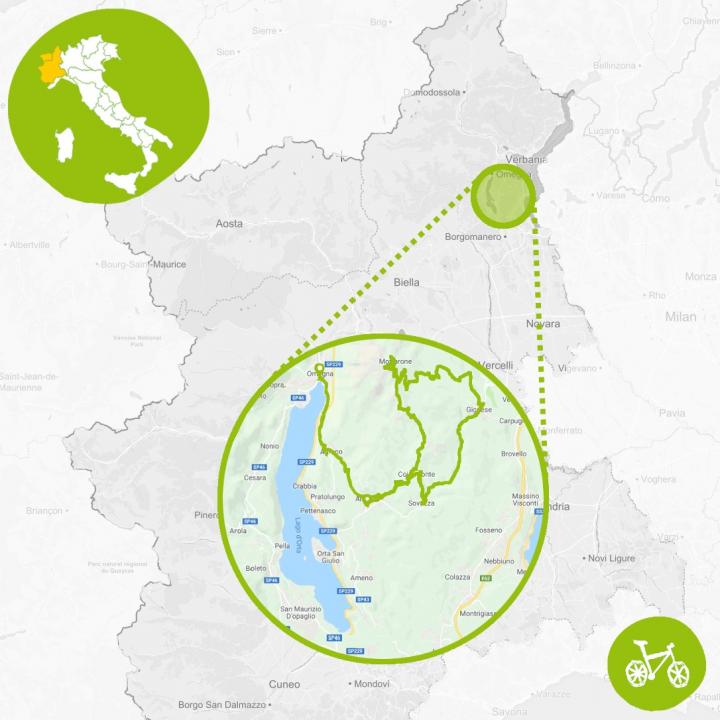 Not physically challenging  - e-bikes help a lot for this :) - with some stretches on unsettled terrain, both uphill and downhill. (trails and unpaved roads, you should not be afraid of a little downhill on gravel, or some roots or loose stones)

Who will our guide be? 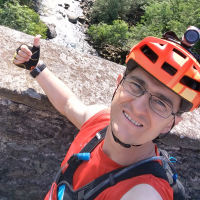 Marco is the head of our biking tours. Master motorbike traveller, he's been everywhere in Europe in the last 16 years, he loves heavy metal music, eating jam directly from the jar with a spoon, living in the country and solving a Rubik's cube in less than 50 seconds. He's got super brains, he has a solution for everything but his stinky socks!

Never without: a Rubik's cube

Is this a trip for me?

This is one of our EASY tours.

We will be riding secondary roads, alternating paved stretches and unpaved sections that might include roots or stones.

This is a real bike ride, a day of outdoor sports, which is why it's important to be fit for it.

We recommend wearing padded cycling shorts as you will be riding for around 4 hours. If you are a frequent rider, remember to bring them with you. If you instead have never used them, re recommend getting a pair. Padded shorts are the biker's best friend (and also of the eBiker), because the legs will hold up well with the electric bike, but a bad “lower back” can really ruin a good day.

In all our eBike tours it is essential to wear a helmet, if you don't have one we can lend it to you. If you rent one of our eBikes, the helmet is included in the price.

How to dress and what to bring

We strongly recommend wearing padded cycling shorts as you will be riding for around 4 hours. If you are a frequent rider, remember to bring them with you. If you instead have never used them, re recommend getting a pair.

If you don't own any specific bike / mountain biking clothing, the advice for outdoor days is always: dress "like an onion" (in layers)!

We advise you to wear comfortable clothing, taking into account that, along unpaved stretches, we could encounter some puddles or a bit of mud (and the mountain bikes do not have fenders). So, to sum up:

We recommend arriving already "dressed for biking", so as to be ready to go. In addition, a tip from our Ale is to carry a spare t-shirt in your backpack, to wear for lunch and / or at the end of the ride when you get back to the car.

The tour starts in Omegna at 09.00 in the morning.

Before departure we will confirm to the registered travelers the exact place of the appointment.

The end of the tour is scheduled, at the same point of the meeting, at about 5pm

If the weather makes the tour impossible, we will contact you the day before (when the weather forecast becomes more reliable) to reschedule the day or for a reimbursement.

The price of the package, 79euros per person, includes:

if you wish to use one of our eBikes for the ride, the cost of the rental for the whole day, including the helmet, is 50 euros, and can be added during the booking.

You can chat straight with us clicking here

We do not own the eBikes ourselves: we work with the best rental companies in Piedmont that, depending on the type of tour we are going to do, provide us with eBikes that are clean, in excellent working order, medium-high range (like Cube, Focus, Haibike, Rossignol, Thok, all equipped with Bosch - Shimano - Yamaha motors) and, importantly, of the correct size.

An electric mountain bike, or e-bike, is a way to deal with paths which normally would not be doable by everyone, and enjoy the road, the landscape and nature.

These are are also called “pedal assist” bikes, because the motor will help the rider in moving, but the rider still has to pedal.

So, by riding an e-bike, someone who is trained can get even further, and beginners can have fun without feeling exhausted straight away.

To understand and get a feel for how much fun and easy to use of these bicycles are, the only solution is to come and try!

Upon booking, full payment is required.

In case there are no more seats available, or if you want to arrange a personalized departure, the price starts from 79 euros per person for 8 participants, and varies depending on the number of people:

The price of the package includes:

If you are booking over a month in advance, only a deposit of 25% is necessary.